Not this Thursday just gone, but the previous one, will go down in history. The day that you (hopefully) picked up that pencil and made your cross in that box. 7th May 2015: the day of the general election.

The outcome of people trudging down to their local polling stations to convey their views seems to have somewhat divided the country. Everywhere you look there are disgruntled members of the public, enraged at what we as a country have allowed to happen, organising protests and even interrupting interviewers on TV. But there are also many faces smiling with delight, knowing that we will be a Tory-governed nation for the next five years.

Whatever your views on how the country should be run, I think we can all agree that all this squabbling does more harm than good. I am personally already fed up with having every single conversation tainted with the discussion of politics and the “terrible decision” that we, as a country, have made.

I will not sit here and preach to you about whom you should have voted for and why; that is not my job. If that is what you want then simply turn on your computer and look at your facebook feed, inundated with tirelessly long-winded opinions on what has happened.

Instead I am going to tell you about why 7th May 2015 will go down in history for me.

When I returned home after casting my vote, something rather special happened. In order for you to get the full effect of just how momentous this something special was I will first need to set the scene.

Every month for the past four years I have had a very particular blood test. This test determines my NMDA antibody levels. The way it works, in simplistic terms, is that the higher the level the more ill I am; my illness has pretty much correlated in severity with the levels of the antibodies for its duration. Since my first blood test back in the summer of 2011 I have been NMDA positive (except for just one). I had started to believe that I would have to live the rest of my life with antibodies floating around in my bloodstream; that I would never rid myself of this god-forsaken illness.

Then Thursday 7th May happened, and everything changed.

I opened yet another letter from yet another doctor and tried to decipher what it was telling me; low levels of haemoglobin, high levels of something else and something strange going on with something else. I put the piece of paper carefully away within the pile of all my results and carried on with my day.

When my Mum came home for lunch she asked to take a look at the results. It was at this moment that my life changed forever.

I had somehow overlooked the most important result. In that box that I was so used to seeing ‘POS’ written there were three new letters. Letters that I had not seen before.

On Thursday 7th May 2015 my antibody levels were finally negative, a moment that will, for me (and all those I cherish) go down in history. 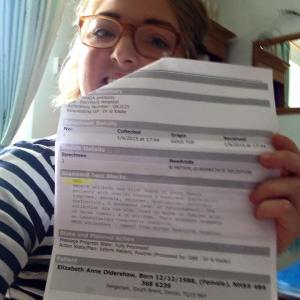 One thought on “Making History”

Join 2,379 other subscribers
Follow My Broken Brain on WordPress.com