What could be more boring than standing in ridiculously uncomfortable high heels in a room filled with over one hundred accountants whilst sipping on a glass of orange juice, I hear you ask?

Perhaps painting an old lady’s nails whilst discussing knitting techniques and watching the gardener out the Residential Home window is more unexciting?

Or even spending the day walking around a Seventeenth Century Period house with an old aged pensioner could be voted most tedious?

These are the activities that I have filled my week with and I would go as far as to say that they are in actual fact the absolute opposite of boring.

Let me start with the Taxation Dinner. Now that my sister has become young, free and single, the task of being her plus one has once again come around. So, after a ludicrously long drive along the A303 I found myself, once again, applying copious amounts of mascara and lipstick in the office toilets for a rather formal function. I might hasten to add that I have managed to get this turnaround to about fifteen minutes, no mean feat as any woman will tell you.

So we arrive at the RAF Club in Picadilly. The first point of contact is the powder room, and what a powder room it is. There are even diamantes on the wallpaper, along with intricate mirrors and personal hand towels. We decide upon arrival that it is, by far, within the top ten toilets we have visited of all time.

Then it is on to the ‘mingling’. Pre-encephalitis, this is where I flourished. Whilst everyone else was knocking back the bubbles, with their flutes being constantly filled, I was stood sipping on my orange juice, hopeful for the relief of seating at the evening meal.

Once we were seated (after waiting for top table to sit down first!) the fun really began. My sister and I were sat opposite two rather merry gentlemen that worked in the law side of Tax. Our laughter filled the room, and after carefully dodging the “what do you do?” questions I finally felt like I could be myself and thoroughly enjoyed the evening.

There was red wine spilt on white dresses, inappropriate heckling at the guest speakers and even PG thirteen jokes thrown around the room. Not what you would call a boring evening.

So what about spending the afternoon painting nails and knitting squares? First off I should mention that said gardener is a rather dashing young fellow with a lovely smile, not bad eye candy for either myself or the other female residents. I have also found something rather therapeutic in the monotonous of knit and purl, not forgetting the achievement one feels when a finished piece comes together.

And last but by no means least, my day out at Saltram. Spending the day curtseying in period dresses, sauntering around the beautiful gardens and gazing in awe at the unbelievable chandeliers is not what I would describe as dull.

In actual fact, my week that has been filled with what some may deem as boring has actually been one of the best of my life. So the answer to the question is this, there are many things that are more boring! 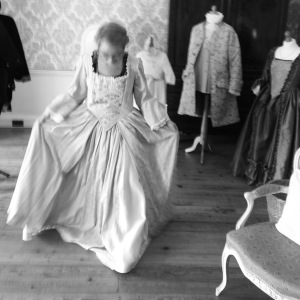 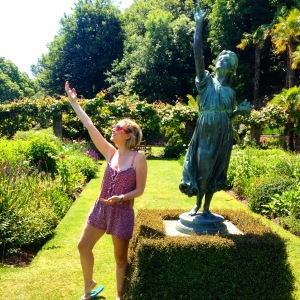 My week of boring